Article by Ray Gregg, South Bend Tribune, April 1972 – The man who designed the Studebaker Avanti is not hesitant to declare that there is "quite a possibility that the Avanti II may become the American Rolls-Royce of the sports car World!" The authority for this statement is famed industrial designer Raymond Loewy, who last week visited South Bend to buy an Avanti II as his top choice in a personal car and to tell Nathan Altman, president of Avanti Motor Corp., what kind of interior decor he wants for the prestige-type sports vehicle. Loewy's two-day flying trip to South Bend from New York City, where he maintains one of his four "homes," was sort of a homecoming, as he renewed old friendships established while he was designer of Studebaker cars from the late 1930's until Studebaker went out of the automotive business in 1966.

His endorsement of the Avanti II was unsolicited and the more he talked about the car whose design has not been changed perceptibly since he originated it 11 years ago, the more enthusiastic he became. "I've looked at cars all over the world and there's nothing on the market that arouses such passion in me as the Avanti," observed Loewy. "It appeals to me tremendously, and it looks just as advanced in appearance today as it did when I designed it in 1961 - 11 years ago. The Avanti was one of the two greatest experiences in my life, and here it is again, unchanged except for the marvelous engineering refinements by Gene Hardig." Hardig, retired Studebaker chief engineer, who worked with Loewy in developing the Avanti for Studebaker, has been connected closely with the Altman organization as chief engineering consultant since it was formed. 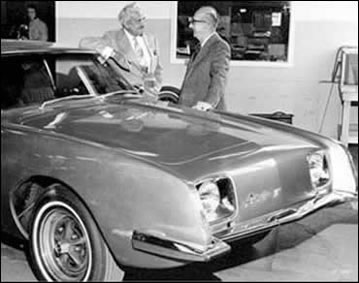 Raymond Loewy and Nathan Altman with an Avant II.