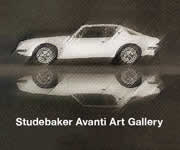 The premier Don Wieland Avanti Collection is completed with a sixth painting. "Wintergrey - Curtain Call at Casa Loma" celebrates a legendary party in November of 1963 at a Gothic Revival castle in Midtown Toronto where the luminaries each arrived in a stunning Studebaker Avanti. "Time Machines" depicts one Avanti beside the H.G. Wells Time Machine and another Avanti zooming past a 22nd century domed skyline. "Ghostriders" depicted turquoise and red Avantis lit by an "Avanti Borealis." The black Avanti was appropriately labeled "The Legend of The Onyx Phoenix." In the "The Whisper and The Roar" a white Avanti is stalked by flying silvery discs. "Gold Out of South Bend" was the title given to the first in the series. Each of the six Wieland Avanti paintings are recipients of the prestigious Stellar Scholars Artistic Achievement Award. Contact: StellarScholars.net About the Artist 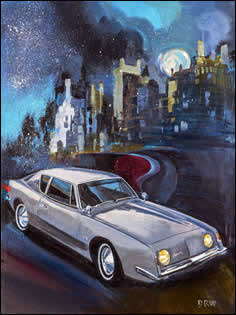 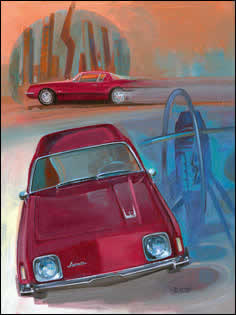 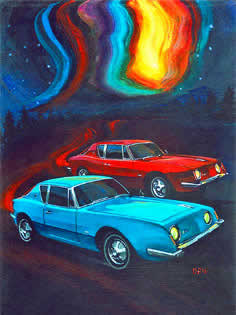 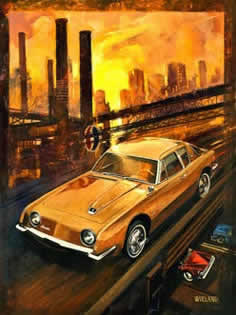 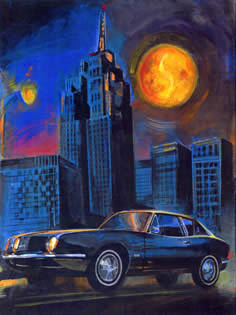 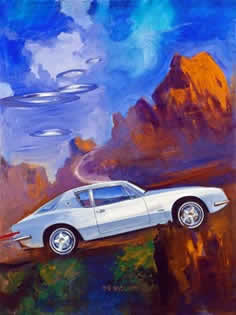 The Whisper and The Roar, painting by automotive artist Don Wieland.