To register your Avanti click the "Register Your Avanti" link above. More than one thousand Avantis are now registered and more are added every day. The Registry provides distinct classes of Avantis from the 1963 Studebaker Avanti through the 2001-2006 Avanti. To view the vehicle's registry select a registry from the menu (upper, left drop-down menu, under the "National Museum" link). Click on the "Register Your Avanti" link on that page and the information will be sent using the form provided. If you have an electronic file of your vehicle you can email it as an attachment. Support The Avanti Registry© with a donation and a "Certified Registration" emblem will be included in your registration. 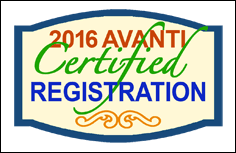 The vin or serial number on 1963-1964 Studebaker Avantis is embossed on a stainless tag about 2 in. x 3 in. This is found on the top side of the right frame rail directly below the heater blower motor in the engine compartment. Today's long VIN numbers began appearing in the 1980s; 1963-1964 Studebaker Avanti serial numbers are in the format "63R 1004." Cars with an additional serial number in the format "EX-2947" were prototypes originally built for the Studebaker Engineering Department and later assigned a regular production serial number.
The "RQA" serial numbers appeared on the first Avanti II models from 1965 and continued into 1970. The "RQB" designation was added in 1970 and "RQA" was discontinued later that year. "RQB" was continued through 1985 though the Avanti II designation ended in 1984. The serial number and month/year of manufacture, along with a statement that all regulations at time of manufacture had been met, is found on a foil sticker or metal plate located near the door latch on the driver side of the B pillar. In addition to the "RQB" number, 16 digit VIN numbers may also appear on 1983-1985 models.

The Registry is divided into distinct categories from the 1963 Studebaker to the 2001-2006 Avanti. The Avanti shown is 63R1727 which is owned and registered by Robert M. Pineiro.