Miniature Avantis have been offered over the decades beginning in the mid 1960s. AMT and Aurora Plastics sold 1/25 scale models during and after the years of Studebaker Avanti production. Beautifully molded models of great accuracey are available from Franklin Mint and Fairfield Mint. Galoob, Shrock, and slot cars also include Avanti models. The AMT Avanti shown below is a re-release of the 3 in 1 Trophy Series kit from the 1960s celebrating the 50th Anniversary of the Avanti. It has box art, decals, and an instruction sheet almost identical to the original. The body features opening doors and a front hinged hood. The kit includes the option of round style 1963 or square style 1964 headlight bezels. More details
SCALE MODELS 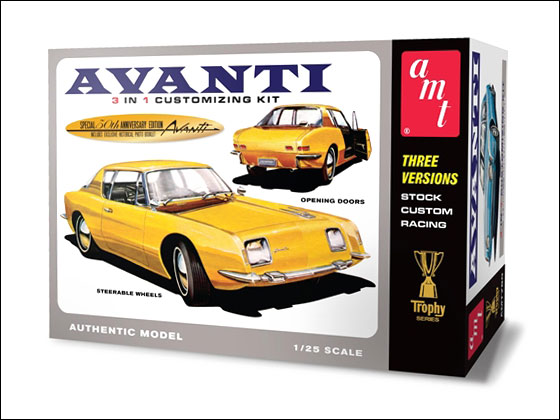