Nathan Altman purchased all rights, equipment, and parts to the Studebaker Avanti on July 1, 1964. He secured the Avanti assembly plant, all Avanti tooling, body production from Molded Fiberglass, and necessary credit. The engine would be a Chevrolet 327-cu-in. Disc brakes were used at the front, as they were on the 1963 and 1964 Studebakers. The pronounced "rake" of the original was eliminated and wheel openings were tightened. Studebaker had built 20 Avantis a day. Altman built 45 in 1965, 59 in 1966, 66 in 1967, and 100 in 1968. Altman labeled the resurrected car 'Avanti II'. Below: Additional changes that distinguish the Avanti II from the Studebaker Avanti include the logo, fog lights and bumper extension. 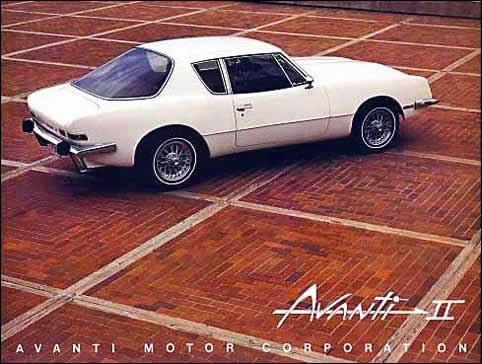