The Avanti was originally conceived as a two-seater. Studebaker chief engineer, Eugene Hardig made the decision to give it a four-passenger configuration. Studebaker president Sherwood Egbert and Hardig agreed that it should be built of fiberglass. The fiberglass body with its relatively low rigidity required a strong frame. Hardig chose the reinforced X-member frame used on the Lark convertible and added front and rear stabilizer bars and rear radius rods. The Avanti was to have had independent rear suspension, but this was dropped due to the expense. Instead, front coil springs from the Lark and rear leaf springs from the Lark station wagon were used and heavy duty, adjustable shock absorbers added. Hardig was stuck with a Studebaker V8 engine that developed a paltry 225 horsepower so he resorted to hot rod techniques: increased compression ratio, more valve lift, and so on. The big improvement came with the optional supercharger acquired from Paxton. Hardig decided that the Avanti required caliper disc brakes. Borg-Warner engineered an automatic transmission that was a three-speed automatic with an unusual arrangement whereby the first gear was operated manually. The second and third gears operated automatically from the "drive" position. Against all odds, Hardig managed to take these diverse scraps and pieces and turn them into a genuinely competitive chassis. 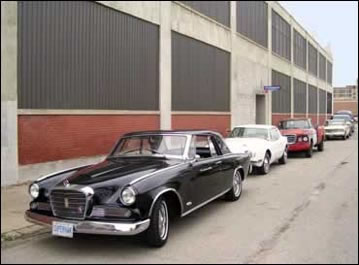 Studebaker Hawk and Avanti parked outside the entrance to the Studebaker Engineering Department. 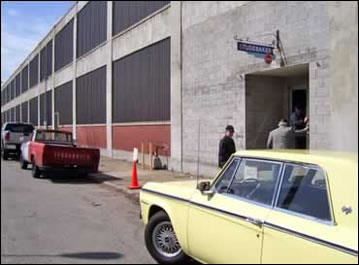