Avanti was sold to Stephen Blake in October 1982. Avantis appeared at the Miami, Washington, and Los Angeles Auto Shows. Blake did not tamper with the car's design yet he was determined to make the car look competitive. The body-colored, contoured bumpers of the era were added and the 1984 Touring Coupe was a limited edition. The first convertibles were built the same year by Richard Straman in California and Mark Doyne in Florida. Blake's ambitious plans for the Avanti did not succeed. His failure appears to have been caused by sealants used in the paint that were not compatible with the fiberglass bodies. Washington business magazine, Regardies, published an article about Blake's company (to view the article pages click the cover; to read the article click the bulleted link) in the February/March 1983 issue.

The Escort GT on the race track. 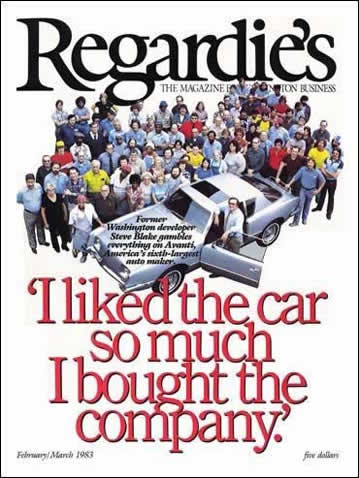